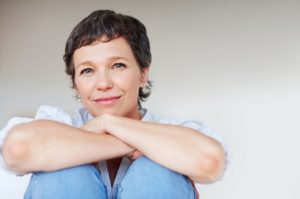 About 1 woman in 72 women will face a diagnosis of ovarian cancer sometime in her life. When found at an early stage, this serious gynecologic cancer has a long-term survival rate over 90%. Sadly, only about 20% of these tumors are found before the disease has spread beyond the ovary. During September, Ovarian Cancer Awareness Month, women’s health organizations are working to make you aware that early detection is the key to saving lives.

The most important thing you can do to reduce your risk of being diagnosed with a late-stage ovarian cancer is to know your personal and family risk factors! If a family member (related by blood) has had ovarian or breast cancer, or Lynch Syndrome– a type of colon cancer, or is known to carry a faulty BRCA1 or BRCA2 gene, you should discuss this risk with your physician. He or she may recommend that you have genetic testing for the BRCA gene mutations (defects). Age is also a primary risk factor for ovarian cancer. It is rarely found in women under 40 years old, and the risk increases as you get older. You can read about other risk factors on the American Cancer Society website.

Second, know the symptoms of ovarian cancer. The disease has been called a “silent killer” because many people believe that women with ovarian cancer have no symptoms until their disease reaches advanced stages. We know now that this is not always true. Many women report a common set of symptoms including:

Unfortunately these symptoms are not very specific. It is difficult not to attribute such subtle, common symptoms to minor illnesses or stress. See your physician if you are having symptoms that are not typical for you and that do not resolve in about two weeks.

Have regular women’s health exams. A pelvic exam is important to your overall health, but unfortunately most ovarian cancers occur after menopause when the ovary has become very small. Even a very skilled and experienced physician is not likely to discover during the pelvic exam that an ovary is enlarged or abnormal (at an early stage of the disease). A Pap test is not a test for ovarian cancer.

Work toward a healthy weight. Studies indicate that women with a Body Mass Index (BMI) over 30 have a higher risk of ovarian cancer.

At this time no screening tests are recommended to detect ovarian cancer in women of average risk. A screening test is a test used to detect cancer (or another disease) in people who have no symptoms. Research has tried to determine whether a trans-vaginal ultrasound study and/or a blood test called CA-125 would effectively screen for the disease. (Women with ovarian cancer usually have high levels of the CA-125 protein in their blood). Thus far, using the tests for routine screening has resulted in women having more tests and sometimes unnecessary surgery without significantly decreasing the number of cancer deaths. Sometimes these tests are used to evaluate women with high genetic risk for ovarian cancer.

Research continues. Recently a very important study was published by the renowned cancer center MD Anderson. It suggested that annual testing year after year to detect subtle changes in a woman’s CA-125 level might identify the point at which she begins to develop ovarian cancer. Another recent study has shown promise in identifying ovarian cancer (an other cancers) early while treatment is more effective. In this case, a blood test for genetic material from tumor cells identified 2/3 of ovarian cancers at Stage I. This research is still in its early stages. For the present, no women’s health organization recommends a screening test for ovarian cancer.

Posts are intended for educational purposes only. These pages are not intended to provide medical advice or physician instruction, and it is not intended nor implied to be a substitute for professional medical advice. Always consult your physician prior to starting any new treatment or with any questions you may have regarding a medical condition.